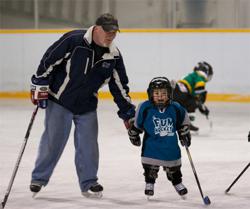 All ice times now are  on Saturdays only.

For the 2002 – 2003 season, the age group was changed to be for 3, 4, and 5 year olds, to coincide with the age change that happened in all age groups throughout Canada.

Over time the league has grown to 32 teams with up to 16 players on each team.

The season starts the first Saturday following the Thanksgiving weekend, and concludes the Saturday in mid to late March (unless that is Easter weekend in which case the season will end one week earlier).  There is a break between Christmas and New Years.  Each team is provided with 1 hour of ice time (shared with another team) on Saturday each week consisting of about 20 minutes of instruction, followed by a 40 minute scrimmage.  After Christmas sometime the 1 hour ice time consists of about 10 minutes of instruction and 50 minutes of scrimmage.